Whenever anyone says they are anti-vaccination the first image I think of is this one: 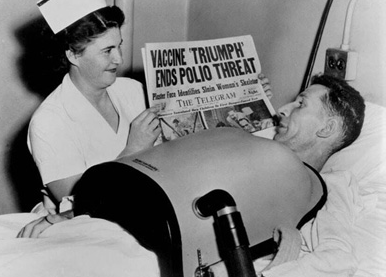 Credit
The photo is reductionist, of course, but it’s also powerful.  Powerful because it encapsulates the current anti-vaccine debate: Vaccines cure and prevent deadly and debilitating diseases and yet are viewed as an olde tymey relic.  For pro-vaccine advocates vaccination’s benefits are established history and to argue otherwise is as incomprehensible as arguing against the Holocaust.  For anti-vaccine advocates there’s a mountain of “evidence” and the wisdom of mothers and fathers with first-hand “experience” and “logical” caution.

I use quotation marks, because I am pro-vaccination; this post is a collection of links and thoughts that I’ve compiled through professional expertise, personal curiosity and Internet wanderings.  If you are sympathetic to anti-vaccination arguments or anti-vaccination currently, or if you’d prefer a medical doctor linking to papers and research, start here:

Dear parents, you are being lied to. by Jennifer Raff

For the rest of us, pop quiz.  What are the only two states that do not allow for a religious exemption from vaccination?  These would be the two states that require vaccination in all instances, except when medically necessary (like due to a suppressed immune system).  Answer below.

The Impacts of Vaccines Lost to Memory Credit
Polio wasn’t the only disease that has been curtailed by vaccines; the Baby Boomer generation received a series of vaccine breakthroughs.  Polio (introduced 1955), pertussis (~1948), measles (1963), mumps (1967) and rubella (1969) all came in relatively short order.  As this Wall Street Journal article reports through heat graphs, after a vaccine was introduced, disease tended to fall rapidly in short order.

Battling Infectious Diseases in the 20th Century: The Impact of Vaccines, WSJ February 11, 2015
With diseases curtailed or effectively eliminated, people (collectively) forgot what dangers they posed.  Where those diseases are still being combated, vaccination rates are better than North America.

Autism: Fear of the Unknown

The most widely publicized anti-vaccination justification is the erroneous belief that vaccines cause Autism Spectrum Disorder.  They don’t.  Vaccines do not cause autism.

Autism’s actual cause, however, has not been determined.  This unknown has prevented the development of medical preventions or cures and leads to fear of the unknown.  Vaccines, to some, have filled the void of knowledge on causation and contributed to declining vaccination rates.  This has exposed an ugly bias.

“[W]e’re facing a massive public health crisis because a disturbing number of people believe that autism is worse than illness or death. My neurology is the boogeyman behind a completely preventable plague in the making."

I’m Autistic, And Believe Me, It’s A Lot Better Than Measles by Sarah Kurchak
Those who are opposed to vaccination out of fear of autism have, tragically, lost perspective on the severity of the threats posed.

Anti-vaccination is not just about New-Age naturalism, autism fears or libertarian parents.  It’s also about SEX.  And no argument is more zombie-like (you kill it but it just doesn’t die) than claiming advances in medicine will lead to more morality-degrading sex.

“This is cancer, for Pete’s sake,” said Dr. William Schaffner, chairman of the department of preventive medicine at Vanderbilt University School of Medicine and a nonvoting member of the committee. “A vaccine against cancer was the dream of our youth.”

Panel Recommends HPV Vacinne for Boys of 11, NYT October 25, 2011
Vaccines to prevent cancer are not being administered because as a society we are prudish.

A Word on Compromise

Vaccination is not a debate.  There is no balance or compromise to be found in administering vaccines.  There is only what is medicine determines is safe and appropriate.  Remember:

Chris Cristie's Terrible Vaccine Advice, Time February 2, 2015
Politicians (like New Jersey Governor Chris Christie) should heed this and stop their natural instincts to find nuance in everything as they try to appease everyone.

Laughter is the Best Medicine

In the vein of Juvenalian satirist Jonathan Swift’s A Modest Proposal:

What are the only two states that do not allow for a religious exemption from vaccination?  These two states require vaccination in all instances, except when medically necessary (like due to a suppressed immune system).

Answer: Mississippi and West Virginia
The Vaccine Lunacy: Disneyland, Measles and Madness, NYT January 31, 2015
Vaccination is non-political, with anti-vaccination uniting the political extremes of both the right (libertarian anti-government) and the left (all-natural, anti-Big Phrama).  Medical exemptions should be the only exemptions, everything else weakens herd immunity and endangers society.
Subscribe